Klepto-Bismo OUT NOW on Amazon

OUT NOW on Amazon 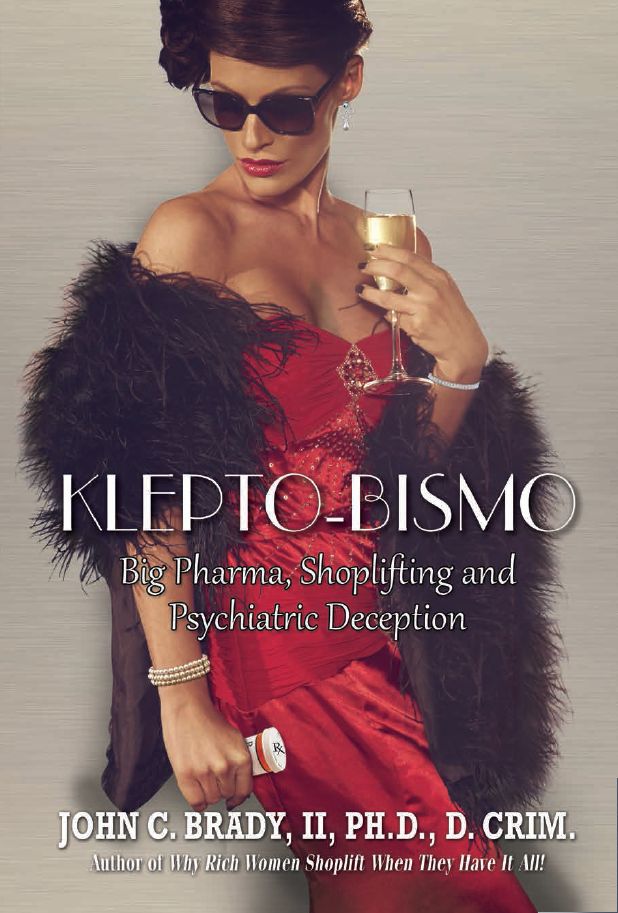 Klepto-Bismo is the second book in Dr. Brady’s Bad Actor’s series devoted to gaining new insight and a better understanding of why women continue to steal and why they do not improve when using psychiatric drugs. In fact, many of them get worse!

The first book, Why Rich Women Shoplift examines the case histories of wealthy female shoplifters who, despite seemingly having it all, make the self-defeating decision to steal. Klepto-Bismo focuses on women shoplifters ( “shoplifter addicts”) and their dependence of unnecessary psychiatric drugs.

The collusion between Big Pharma and psychiatry helps foster a state of shoplifter learned helplessness, which disenfranchises women, erodes their self-determination, and condemns them to a world suffused with pills. As of 2015 a large body of research indicates that the use of psychiatric medications has not worked out for unsuspecting women who steal or, for that matter, with other women misdiagnosed with a pseudo-psychiatric disorders. However, not all shoplifters are referred to psychiatrists for treatment, then inundated with dangerous psychotropic medications.

Some fortunate women shoplifters come to realize that the “psychological high” generated by their stealing is but one overt symptom of shoplifting addiction, and they’re now, in larger numbers, being referred to non-psychiatrist mental health professionals who believe that stealing is a behavioral addiction, rather than some sort of organic or brain disorder like diabetes. Digging into the interdependent tryst shared between Big Pharma, the government, and the psychiatric complex has convinced Dr. Brady and other forensic psychologists that explaining this entire cabal is far beyond the scope of a single book. Rather, in these eight chapters, he has delved into the collusion between the twenty-first century “medicine men” (psychiatrists) and Big Pharma, who combine their might to create what he contends is an attempt to control psychiatric patients, especially disenfranchised women.

A substantial portion of Klepto-Bismo is devoted to how psychiatric drugs have historically been used as a method to dominate people—a kind of drug control, if you will.

Dr. Brady says: “I won’t sugarcoat it—this is absolutely what I believe most psychiatrists have been trained to do, and what many of them devote their practices to. Prescribing powerful psychoactive drugs.”

When you closely examine the medical practices used by today’s psychiatrists, they are reminiscent of the fallacious techniques used by the old medicine men yet these doctors come fully equipped with modern technologies such as MRIs, brain maps, and sacks stuffed full of new psychotropic drugs. Connecting the theories of old psychiatry to the beliefs of modern psychiatry illuminates that both eras are similarly marked by an unswerving need to believe that psychological issues can simply be reduced to vague, unproven organic bases or equally vague neurotransmitter issues. Women shoplifter addicts’ brains don’t short out like a broken electrical outlet in your home.

It’s a controversial notion, but Dr. Brady posits that deep down, psychiatrists, seeking patient containment have, over several decades, advanced their controlling roles by prescribing medications. Therefore, one goal of Klepto-Bismo is to help inform readers of the dangers of allowing doctors, who themselves are not sure what the effects of the drugs they prescribe. Psychiatry’s achievement of its endgame is tied to the number of prescriptions that psychiatrists, goaded on by Big Pharma, can write Klepto-Bismo presents actual patient accounts and historical evidence that the real goal for the use of psychiatric drugs is for patient management.

It’s time to work on curing this country’s prescription drug epidemic the psychiatrists don’t want you to see—yet is as transparent as a discarded bottle of pills.