Coming Soon: Caught in a Trap 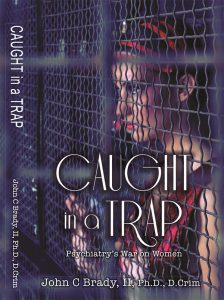 Caught in a Trap tells the stories of twelve remarkable women who through no fault of their own became enmeshed in the uneven world of psychiatry and psychiatric medications. Each woman presents a unique point of view as to what happened leading up to her psychiatric referral. I’m sure each doctor has an explanation why they were medicated using powerful and mostly ineffective psychoactive drugs to treat sometimes even minor legal-social-psychological issues (e.g., shoplifting). Perhaps the negative outcomes including psychiatric hospitalizations weren’t intentional but that’s where, for instance, Barbara Gordon, an award-winning TV producer and writer, ended up. In Caught in a Trap Dr. Brady argues that psychiatric medications are not the answer to women that steal.