Men of steal: A brief look at the psychology of Celebrity Theft

Men of steal: A brief look at the psychology of Celebrity Theft 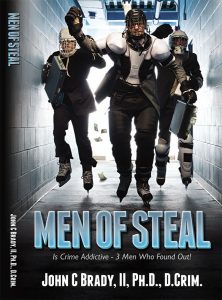 Celebrity offenders must figure out why they steal or face jail! Psychological analysis reveal they aren’t greedy—they are addicted to the “rush” associated with theft. They need therapy but will they see “the light” because this could be the end of the road?

An in depth analysis of celebrity theft-addiction has not previously been addressed in a true crime book. Dr. Brady’s new book isn’t a “who dunit” mystery but it is a “Why they dunit!” The book features three special celebrity cases Dr. Brady has already analyzed and written about in his new book.

The book shapes their stories, establishing them as good examples of bad behavior. The narratives from these cases and a hundred additional cases form the basis for his criminal reportage and unique deviance theory: That certain categories of crime (especially white-collar or elite theft/fraud) can be reinterpreted as a behavioral-addictive process. Men of Steal is a character-driven drama demonstrating that once offender’s theft-addictive status is unveiled and confronted celebrity criminals can be redeemed.

In Men of Steal, Dr. Brady analyzes three “one percenters” who stole millions to buy professional hockey teams. They didn’t do it to pad their Swiss bank accounts. The characters in Men of Steal are: film producer and former Los Angeles Kings owner Bruce McNall, a convicted felon who spent five years in Lompoc Federal Prison for stealing $238 million; John Spano, the former owner of the New York Islanders, who did two terms in federal prison (he stole $80 million) and is currently an inmate in an Ohio prison, serving 10 years for a third-strike crime he didn’t initiate; and William “Boots” Del Biaggio, a former Silicon Valley venture capitalist, founder of a San Jose bank and a 2016 graduate of Lompoc after spending eight years for fraud. Del Biaggio stole $110 million to buy the Nashville Predators.

Based on Dr. Brady’s case analyses, these big-time thefts had very little do with the Brink’s truckload of cash these men stole. Instead, each man wanted to be a big shot and crime was a handy extension of their undiagnosed theft-addiction yielding a desired “rush” after they stole. Crime as a unique category of behavioral addiction is at the center of the reasoning. In Men of Steal, these unsympathetic characters consistently could provide no sensible answer as to why they defrauded banks out of a combined total of $500 million. They were in deep psychological and legal trouble but didn’t know why. The end result is that theft-addicts use the stolen cash to boost their status and egos so they can really be big shots.

For example, John Spano’s colorful escapades were featured in an ESPN 30 for 30 film, Big Shot, produced and directed by Kevin Connolly (Entourage). Recently, Dr. Brady visited John in an Ohio prison where he finished interviews for the book. Spano remains uncertain why he engaged is self-destructive theft acts. His episode will demonstrate how Dr. Brady is helping him to look for new clues in all the right places this time—inside his head. Men of Steal psychologically unmasks (as Dr. Brady did in his forensic practice with the characters in Men of Steal) the reasons why rich and successful people turn to the dark side.

The three characters analyzed in Men of Steal had so many tricks up the sleeves of their designer tuxedos that, the master himself, Harry Houdini, would have been envious. One thing is certain, similar to what Sinatra said, for better or worse, these guys definitely did it “their way.”

In your wildest imagination you probably couldn’t put together their bag of tricks, even if you really put your mind to it. But that’s because average people unlike John “Big Shot” Spano, “Hollywood” Bruce McNall and Boots Del Biaggio, the “little king of Silicon Valley,” are not bad actors nor did they strive to be. Eventually each of these men flamed out after they already had burned their share of naïve victims, who even today are left asking: “So what happened? How come I didn’t see it coming? How could I have been so stupid? I never could have guessed it.”

Men of Steal tells the tales of these three fascinating, larger than life, made for Hollywood characters who, for their own selfish reasons, reached for the sun and, like Icarus, got burned. They left a devastating wake that destroyed personal, familial and business relationships thereby altering their lives and the lives of their victims forever.

Ironically, at one time these men seemed close to the top of their games, having achieved business success and a large measure of personal respect. Their loyal fans may have thought they did seem to have it all. They weren’t born as conmen, but, as we’ll see, along the way they got there.

The major question raised in this book, and maybe the most important one, is this: Why did these three men sabotage their lives and for what? This is especially relevant because they clearly knew right from wrong and additionally they didn’t need to commit serial criminal frauds to survive and pay the bills, even for their costly Hugo Boss suits.

Following their wild lives is a trip worth taking. In Dr. Brady’s view, all three men were more addicted to theft than outright, garden-variety felons. The real reason underlying their frauds is unmasked for us to see and then wonder about the Winona Ryder and Kim Richard’s of the world. Were they also addicted to stealing?